END_OF_DOCUMENT_TOKEN_TO_BE_REPLACED

El Salvador too strong for Curacao 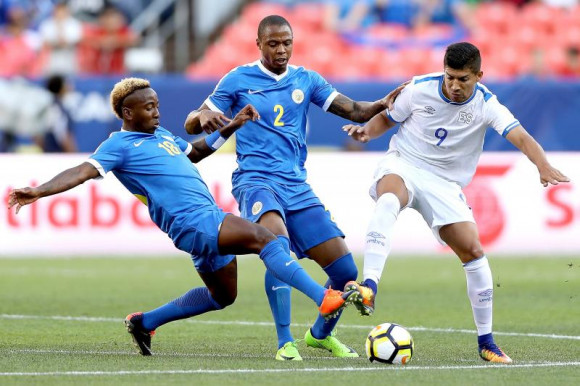 The Curacao national team played its second match in the Gold Cup tournament on July 13 in the Sports Authority Field in Denver. Team captain Cucu Martinahad already left the team to join the Everton team in preparation on the new season. Felitciano Zschusschen and Jeremy de Nooijer also flew back to Europe for the start of the competions.
Team El Salvador shattered Curacao's Gold Cup dreams by scoring in the 21st and 24rd minute of the game. Curacao was awarded a penalty in the 44th minute, which could have been a lucky break for the team. Regrettably Gevoro Nepomuceno kicked teh ball right into the arms of the sharply focussed keeper of the El Salvador team.
In the second half Curacao kept trying but El Salvador properly defended their winning position.
After the 0-0 draw between Mexico and Jamaica these teams share the top of the table in group C with 4 points each. El Salvador gathered 3 points with their win, and Curacao has zero points and has virtually no chance of reaching the quater finals.

Next match is against Mexico in San Antonio on Sunday July 16.