END_OF_DOCUMENT_TOKEN_TO_BE_REPLACED

Brave Curacao put up a great fight against Mexico 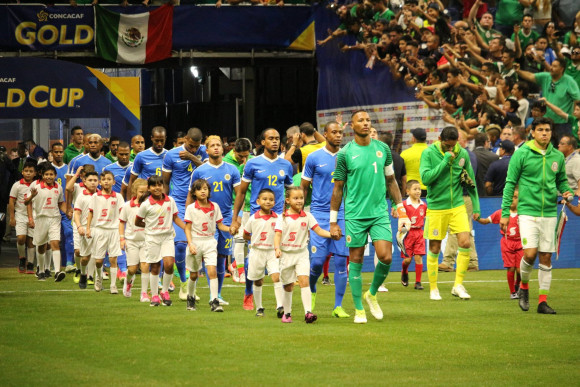 Curaçao was ousted in the 2017 Gold Cup tournament after a 0-2 loss against Mexico but the players can keep their head up. The Curacao team played all or nothing an started the match by systemically attacking the Mexican goal in their third match on the Gold Cup platform. In the exiting atmosphere of the Mexican fan-filled Alamodome Curacao fought for what it is worth - and even after Ángel Sepúlveda scored for ‘El Tri’ the 22nd minute, the Curacao team kept going for their goal.
In the second half  Curacao even turned up the heat a notch and created a number of scoring opportunities but it was not to be. Several shots ended at the goal posts or in the arms of the Mexican keeper. Coach Bicentini tried some replacements and Curacao’s local favorite Ashar Bernadus got his long-awaited chance.  To no avail regrettably and in extra time Edson Álvarez scored the second goal for the Mexican team. With this score Mexico ended at the top of group C and will move on to the quarter finals together with Jamaica and El Salvador.

Curacao lost all three matches with a 0-2 score but proved to be a competent team in its first appearance at the Concacaf platform. The Curacao community expressed its pride broadly on social media and is looking forward to the next engagements of the now seasoned team.